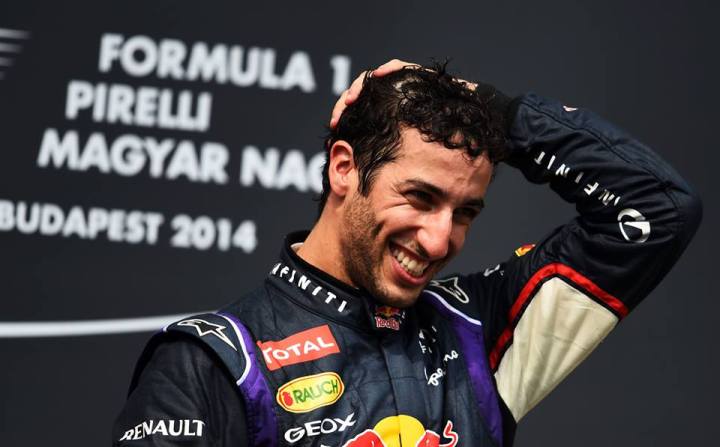 Daniel Ricciardo stormed his way to his second victory of the season (and his career) at a thrilling Hungarian Grand Prix. For the first time in a long time it seems, Ferrari graced the podium with Fernando Alonso finishing second. While, on a track where you can’t pass, Lewis Hamilton passed 19 cars to take home third.  The sopping track conditions at lights out saw spray obscure the field’s view (unless you were pole sitter, Nico Rosberg), as the grid cautiously filed through turn 1. Bottas made a smart move, keeping to the outside of the track, and out of the spray to take Sebastian Vettel for P2, while Fernando Alonso made a quick move passed both the Red Bulls of Ricciardo and Vettel. Despite a very slippy track, everyone emerged unscathed from the first lap, even Massa. The only opening lap incident was Hamilton spinning at turn 2 as he caught he way up from the pit lane.

Ricciardo had a faultless race, consistently setting fastest lap times throughout the race. Making his way from P4 on the grid, the Australian managed his tyres on a three stop strategy, holding his position while others pit again. After passing Hamilton on lap 67 on the inside of turn 3, Ricciardo set his sights on Alonso for the lead. The two replicated their performance from last week, with Ricciardo wasting no time in attacking. Just one lap later, Ricciardo lined up the Ferrari on the run down in to turn 1, taking the lead and subsequent win. Vettel very nearly repeated the manoeuvre that sent Sergio Perez into the barriers. On lap 33, Vettel got onto the astroturf at the exit of the final corner, sending the RB10 into a nice little pirouette, grazing the pit wall before throwing it back in gear and charging back down the pit straight. Vettel had been running in P4, and the incident saw him fall down the order to P13. Vettel managed to make up six positions to finish P7.

Almost as surprising as Hamilton’s podium appearance was Alonso’s place on the second step in the less than competitive Ferrari F14 T. Alonso inherited the race lead following the second safety car period, building up the gap by setting fastest lap times. For a moment it looked as if a Ferrari might win a Grand Prix for the first time this season. Daniel Ricciardo saw to that however, with Alonso happy to finish P2. The surprises in the Ferrari garage continued as Raikkonen sneakily made up ten positions to finish P6.

It was refreshing not to see Mercedes walk away with the race result. Mercedes were already brought down a peg or two as the Hungaroring favours downforce rather than sheer speed, but Rosberg found it difficult to overtake, and struggled with his brakes to give way for a more hair raising race. The rules didn’t seem to apply for Hamilton, who found no issue in overtaking on the startling narrow circuit. Starting from the pit lane, the Briton made up 19 positions on a two stop strategy to finish on the podium. The only car that Hamilton failed to pass was Alonso’s F14 T. By the end of the race, Hamilton’s tyres were dead and the Mercedes power just couldn’t make a move stick against the Ferrari. Hamilton was hungry for the points, and was never going to move aside to let Rosberg through (who was on a different tyre strategy). Rosberg couldn’t catch up to his team mate in racing conditions until the final lap. Rosberg was on fresher tyres than Hamilton, and the two engaged in an intoxicating wheel to wheel battle for third. Not letting up, Hamilton forced Rosberg wide at turn 2, with Rosberg losing time and settling for P4.

It was a double points finish for Williams as Massa finally seems to have shaken his new talent of being crashed into, with the Brazilian finishing a very competitive P5. Bottas had a strong start, cleverly keeping to the outside line into the first corner to avoid spray and make up a position against Vettel in the opening lap. The Finn continued to defend against the Red Bull, who even with DRS wasn’t able to pass the Williams. As the race progressed, Bottas’ pace dropped off and the Williams’ complained of understeer, eventually finishing within the points in P8.

Vergne had his best race of the season, strategically right before the summer break and “silly season”. Whether Vergne is feeling the pressure to prove his potential in the team, or the Hungaroring favours the STR9, it was a fantastic race for the Toro Rosso driver. Making his way up to fifth, Vergne defended his position from Rosberg, who on fresher tyres was eager to get back to the lead. Vergne slipped passed the Mercedes after Rosberg tried and failed to pass Magnussen at turn 1 on lap 16. It can’t be said that Vergne held up the Mercedes, as the Toro Rosso was still lapping at a competitive pace clearly benefiting from the wet track and high downforce. By lap 27, Vergne was up into second, and again defending from Rosberg. Despite it being the Mercedes, and the Toro Rosso not having DRS, Vergne again managed to keep Rosberg at bay, until pitting on lap 35. As the grid settled down following the pit stops, Vergne finished in P9 to collect two happy points for the team. For once over shadowed by his team mate’s performance, Kvyat finished outside of the points in P14.

McLaren should have finished higher in the order, if it weren’t for their risk in tyre strategy not paying off. The team played a gamble on the reappearance of rain, keeping Button out on the intermediates after the first safety car period. For a while, it looked as if the strategy had paid off, with Button being able to easily swoop passed Ricciardo on slicks for the lead at the race restart. As the race wore on, the rain never came and the rest of the field on slicks got up to temp. On lap 16 McLaren pitted both Button and Magnussen for soft compound tyres, but Button was unable to make his way back to the front of the grid, only on lap 30 managing to pass Sutil at turn 1 to get himself into the points. Button would finish the race in that position to collect a single point for the team in P10. Starting from the pit lane after his crash in qualifying, Kevin Magnussen made up 9 position throughout the race to finish P12.

Sutil had an uneventful race, with the Sauber driver starting and finishing in P11. Despite the number of non-finishers in the race, Sutil couldn’t manage to get the C33 into the points. The only racing action that Gutierrez encountered was going wheel to wheel with Sergio Perez on the exit of the pit lane. Under the first safety car period, made the dash in for medium compound tyres. After being released at the same time, the two went into a kind of Mexican stand off (pun intended) on the exit of the pit before Gutierrez yielded, allowing Perez out in front. Unfortunately, as the race progressed Gutierrez added himself to the list of race retirements on lap 32 after the MGU-K system failed in his C33.

Maldonado was lucky to finish the race in one piece, spinning at turn 1 and clipping the Marussia of Jules Bianchi on lap 18, eventually finishing P13. The Lotus driver suffered from understeer during the race. A typical issue due to the set up of the car for the circuit, though it made the E22 trickier than usual to handle. Adding to the teams woes, both E22s struggled for tyre temp (especially under the safety car periods)… Poor Grosjean.

Though not picking up any points, both Marussia’s finished the race. Bianchi made up one grid position throughout the race to finish P15. Max Chilton had a quiet race at the back of the grid, being promoted to finish P16 as the rest of the field dropped like flies.

Force India leave the Hungaroring without any points, with neither driver making it to the chequered flag. Perez takes the award for most spectacular crash of the afternoon after crashing into the pit wall barrier on lap 22. The Mexican dipped a wheel onto the astroturf at the final corner, flicking the VJM07 across the track. Perez however was lucky to make it to lap 22 after an on track incident with his team mate several laps earlier. Hulkenberg had clipped the back of Perez going into turn 14, Perez was able to control and recover with minimal damage, but the contact sent Hulkenberg’s Force India into the barriers and out of the race.

Caterham made up the second double retirement of the afternoon, albiet one driver ‘retired’ with a little more force than the other… Marcus Ericsson had brought out the first safety car of the afternoon. At lap 9, track conditions were still slippy (even on the inters). Ericsson lost traction and dropped it on the entry into turn 3, spearing his CT05 straight into the barriers. Kobayashi came to a stop at turn 12 on lap 24.

The Hungaroring always promises a good race, but this year the circuit delivered some of the best action all season. Another win for Ricciardo, and a Ferrari finally on the podium. Hamilton and Raikkonen chose to ignore the “it’s next to impossible to pass at the Hungaroring”. The wet weather and cooler track conditions send Ericsson, Perez, and Vettel into spins. While the high understeer and downforce of the set up saw Hulkenberg and Maldonado very twitchy. Overall, a pretty good race to end the first half of term with (and we thought this season was going to be boring). We’ll return from the summer break at Spa-Francorchamps for the Belgium Grand Prix and the stunningly beautiful, Eau Rouge. Until then, goodnight. – Alex 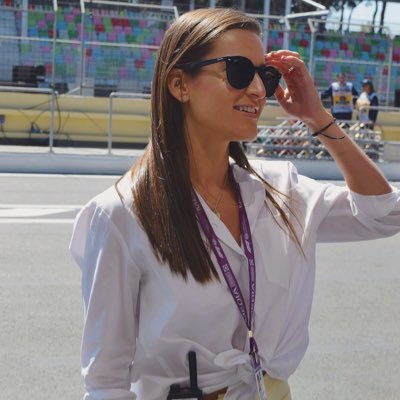