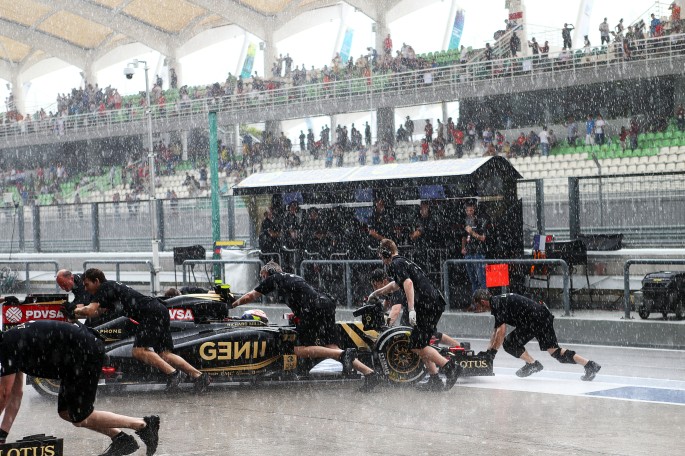 Hello, dan selamat datang ke Kuala Lumpur! Round two of the 2015 Formula 1 Championship gets underway at the Sepang International Circuit. The 5.543km circuit runs clockwise for 56 laps, through 15 corners, and two DRS zones. The opening sequence of corners requires good engine tractability, as the right hander for turn 1 immediately snakes into a tight left-hander into turn 2. In wet conditions (and let’s face it, Malaysia is pretty wet), there are a lot of slippy racing lines. Turn 3 requires a lot of driver confidence to take the long right-hander at speed to open out to the straight leading into the heavy braking zone of Langkawi corner. The second sector is made up of a series of high speed corners, requiring a stiffer suspension set up. Sepang is a punishing track in terms of tyre wear and brake wear, with turn 7 being particularly tricky on the tyres, and turn 9 hard on the brakes. The final sector is the fastest sector of the track, with the second DRS zone on the back straight, it’s full throttle into the hairpin at turn 15. Given the number of different racing lines that can be taken, overtaking is quite common through turns 1 and 2, as well as turn 15.

Qualifying got underway in typical tropical form, wet. Q1 started dry, but with the ominous threat of rain, it wasn’t until Q2 that the skies finally opened, making the first lap of Q2 the deciding passage into Q3. After a short delay, the track had dried enough for the session to resume, as drivers wasted no time in exploring the tricky conditions. The Mercedes front row lock out has been broken for the first time in ten races, Hamilton still will start P1, but it’s Sebastian Vettel in the prancing horse that will start alongside him. Nico Rosberg is left P3, starting on the clean side of the second row.

Mercedes have yet again dominated the time sheets over the weekend, though it was Hamilton who kept his cool in the wet conditions in qualifying to secure pole yet again. Both the Mercedes were early out and early in during Q1, knowing that it was a well timed run in Q2 that would make the difference. Hamilton was not happy to be caught in traffic during Q2, complaining that he was let out too late. The Brit finished the second session in P8, though it didn’t really matter given that his Q3 lap time was 1.232s quicker than his teammate’s, and 0.74s faster than Vettel. Hamilton chose the tight line into turn 1, giving a wider entry into turn 2 for his final flying lap of the afternoon, giving him the edge over Vettel. Rosberg couldn’t find the right racing line in the wet conditions, with the F1 W06 crossing the line P3 on the inters with 1:50.299.

Sebastian Vettel repeated his 2014 effort in qualifying, once again splitting the Mercedes for P2, although this time for the Scuderia. Forever strong in the rain, Seb ran two sets of intermediate tyres, keeping himself at the top end of the time sheets. On his flying lap in Q3 to the wide line into turn 1, giving a tighter entry to turn 2, the opposite to Hamilton’s line, giving him a 1:49.908. Both Vettel and Hamilton were the only drivers who managed to dip into the 1:49s in the wet. Kimi Raikkonen’s only chance to get through to Q3 was spoiled at turn 1, and again at turn 15 by Sauber’s Marcus Ericsson. Ericsson in the C34, also on a flying lap, took a different line to Kimi in the SF15-T. Kimi caught in traffic put in a 1:42.173 on three-lap old medium tyres, settling Kimi for P11.

Red Bull Racing line up on the second and third row of the grid, an improvement from Australia. Both RB11s made it through to the final session. Daniel Ricciardo, starting P4, was just 1.242s behind Nico Rosberg’s fastest Q3 time in the wet. Red Bull are traditionally strong in the wet due to the set up of the car, more downforce means better grip through the corners, and minimises the speed advantage from the Mercedes power unit. Daniil Kvyat was momentarily in the drop zone in Q1, though his final flying lap saw him leap frog up to P6. Kvyat improved his position in the final session to start in P5, after setting a 1:51.951.

Scuderia Toro Rosso, like their big sister, ventured out on the hard compound tyres in Q1 before making the swap to the intermediates. Max Verstappen equalled his father’s best career qualifying in his second race in Formula 1. Verstappen’s 1:51.981 on the inters slot the STR9 into P6, just behind Daniil Kvyat. Verstappen was at home in the wet, taking wide lines, and being confidently late on the braking. Carlos Sainz was unlucky not to make it through to Q3, after suffering from a lock up into turn 14 giving him a handful of oversteer. The mistake cost the rookie considerable time, and as the rain began to bucket down he was unable to put in another lap. 1:43.701 puts the STR9 in P15.

Williams Martini Racing qualified somewhat out of order, with the FW37 not as nimble in the wet. In the dry opening session, both the Williams were within the top 5 of the time sheets on the medium compound tyre. Even as conditions deteriorated in Q2, Massa and Bottas easily made it through to Q3. The final 12 minutes of qualifying came down to strategy, with the team attempting to get Massa and Bottas last across the line to take advantage of the dry(ish) line appearing. In the end, a 1:52.473 for Massa, and 1:53.179 for Bottas put the two Williams in P7 and P9 respectively.

Marcus Ericsson made it through to the top ten shoot out for the first time in his career. Despite holding up Kimi Raikkonen in Q2, the Swede managed a flying lap on the inters, to see him through to eventually qualify P10 with 1:53.261. Felipe Nasr was unable to keep up his early qualifying form from Australia, a rear wheel lock-up into turn 4 spoiled Nasr’s flying lap in Q1, resulting in the Brazilian’s 1:41.308 placing him P16.

Lotus F1 Team were tipped to be a dark horse in qualifying, with the E23 expected to qualify between P6 and P8. Both Grosjean and Maldonado made it out of Q1. Grosjean had a little twitch onto the back straight of his final flying lap in the opening session. Maldonado had a slightly bigger moment into turn 1, though still managed to set the fastest sector 1 time in Q1… The E23 has never tested with wet weather tyres, so the team made the cautious decision to go out on the full wets in the opening stint of Q2, then swapping to the intermediates. Unfortunately neither Grosjean or Maldonado were able to complete their flying laps on the intermediate tyres. Grosjean’s 1:41.209 was enough to see him through to the top ten shoot out, though Maldonado’s 1:42.198 just missed out, qualifying P12. Grosjean went on in Q3 to qualify P8 with 1:52.261 on the inters.

With the rain failing just a little too late for Force India, Nico Hulkenberg managed 1:43.023 on his one and only run in Q2 for P13. Sergio Perez gave it all he had in the back end of Q1, needing to find a few hundredths on his lap to ensure his passage to Q2. A well put together time of 1:41.036 saw the Mexican squeeze his way through. In Q2 however as the fast approaching rain began to fall, the one and only flying lap Perez was able to put in on the medium compound tyres was 1:43.469, only enough for P14. Perez’s qualifying was somewhat compromised by being the last car out in Q2, meaning he was unable to find a clear piece of track.

McLaren continued to struggle, as both failed to make it out of Q1 for the second round running. With the MP4-30 still down on power, both Button and Alonso put in 8 laps each on the medium compound tyre, but remained in the drop zone for the entirety of the session. On their final flying lap, two duo gave it everything, but the Honda power unit could only deliver enough for Button to qualify with 1:41.636 in P17, ahead of Alonso’s 1:41.746 for P18.

Manor F1 Team will race at the stewards discretion tomorrow** after Roberto Mehri failed to make the 107% rule (1:46.218s), missing out by 0.4s. Will Stevens wasn’t able to run at all in qualifying, with a fuel system issue from FP3 keeping him in the garage for the rest of the afternoon. Stevens was able put in laps inside the 107% cut off time in the earlier practice sessions, proving that the Manor cars have the pace to keep up, they just need the chance to do so.

Race day strategy is completely dependant, yet again, on the race. The abrasive nature of Sepang is ridiculous on tyre wear, so a dry race could even be a three stopper. If the rain falls*, this will benefit the Red Bulls’ and Toro Rossos’, closing the gap to the Mercedes power. Williams and Force India struggled the most in the wet conditions. So, Sunday’s race is Hamilton’s to defend and Rosberg’s to recover, personally I’ll be looking at what the Ferraris’ do now they’re within reaching distance of the Mercedes. Forever keeping my fingers crossed for a wet race in Malaysia, see you tomorrow.

* Turns the circuit into a river

** Manor received approval from the FIA at 19:37 local time Saturday evening to start the race.